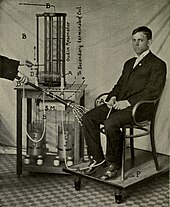 The first recorded treatment of a patient by electricity was by Johann Gottlob Krüger in 1743. John Wesley promoted electrical treatment as a universal panacea in 1747 but was rejected by mainstream medicine. Giovanni Aldini treated insanity with static electricity 1823-1824.[2]

The first medical treatments with electricity in London have been recorded as far back as 1767 at Middlesex Hospital in London using a special apparatus. The same was purchased for St. Bartholomew’s Hospital only ten years later. The record of uses other than being therapeutic is not clear, however Guy’s Hospital has a published list of cases from the earlier 1800s.[3] Golding Bird at Guy’s brought electrotherapy into the mainstream in the mid-19th century.[4] In the second half of the 19th century the emphasis moved from delivering large shocks to the whole body to more measured doses, the minimum effective.[5]

Some equipments historically used in electrotherapy include;

Some important people in the history of electrotherapy include;

Since that time almost all rehabilitation involving muscle contraction has been done with a symmetrical rectangular biphasic waveform. During the 1940s, however, the U.S. War Department, investigating the application of electrical stimulation not just to retard and prevent atrophy but to restore muscle mass and strength, employed what was termed galvanic exercise on the atrophied hands of patients who had an ulnar nerve lesion from surgery upon a wound.[7] These galvanic exercises employed a monophasic wave form, direct current.

In the field of cancer treatment, DC electrotherapy showed promise as early as 1959, when a study published in the journal Science reported total destruction of tumor in 60% of subjects, which was very noteworthy for an initial study.[8] In 1985, the journal Cancer Research published the most remarkable such study, reporting 98% shrinkage of tumor in animal subjects on being treated with DC electrotherapy for only five hours over five days.[9]

SIS electromagnetic therapy; used at a hospital in Budapest, Hungary

Some of the treatment effectiveness mechanisms are little understood, with effectiveness and best practices for their use still anecdotal.

A 2015 review found that the evidence for electrotherapy in pregnancy-related lower back pain is “very limited”.[18]

A 2014 Cochrane review found insufficient evidence to determine whether electrotherapy was better than exercise at treating adhesive capsulitis.[19] As of 2004, there is insufficient evidence to draw conclusions about any intervention for rotator cuff pathology, including electrotherapy;[20] furthermore, methodological problems precluded drawing conclusions about the efficacy of any rehabilitation method for impingement syndrome.[21]

There is limited, low quality evidence for a slight benefit of noxious-level electrotherapy in the treatment of epicondylitis. [22]

A 2012 review found that “Small, single studies showed that some electrotherapy modalities may be beneficial” in rehabilitating ankle bone fractures. [23] However, a 2008 review found it to be ineffective in healing long-bone fractures.[24]

A 2012 review found that evidence that electrotherapy contributes to recovery from knee conditions is of “limited quality”. [25]

A 2016 Cochrane review found that supporting evidence for electrotherapy as a treatment for complex regional pain syndrome is “absent or unclear.”[27]

Another 2015 Cochrane review found no evidence supporting the user of electrotherapy for venous stasis ulcers.[33]